Most of our replicas are crafted by our own artisans and available only from us. We are proud of the large number of objects that are designated with this symbol of exclusivity.

Some large, heavy or oversized items require truck delivery. Additional shipping charges will be incurred for some items (shown next to this icon). Rush shipping is not available. Delivery available Monday-Friday to the 48 contiguous United States only. The carrier will contact you directly to arrange delivery to the first door, so please provide a daytime and evening phone number. Need a hand? White-Glove Service is available for an additional charge. Design Toscano’s White Glove Service will bring your new treasure inside, unpack it and remove packaging materials. Call Customer Service at or email us at Customer for a quote.

Due to the oversized nature of these products, rush shipping is not available. On occasion, additional shipping charges will be incurred for some items (shown next to this icon). 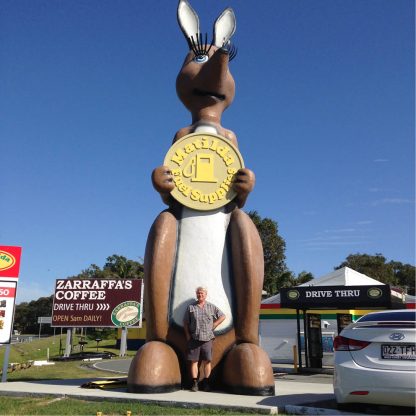 The original Matilda was built for commonwealth games 20 years ago – Natureworks has now refurbished a slimmer version and allows it head to turn 45 degrees in two directions and one eye winks.

The original Matilda stood at 13 metres tall and made her debut at the Commonwealth Games in 1988. She was the star of the show but was never designed and fabricated to weather the elements and the passage of time.

She was stored away in a paddock and forgotten about for some years before being bought by the Matilda Petrol Station Group in about 2007.

They spent well over $100,000 to renovate her and relocated this icon to their signature servo north of Gympie, where she now resides hidden from the passing traffic in the new roadhouse sold by the Matilda Fuel Group to the new owners “PUMA” who relinquished their connection with the kangaroo.

Prior to the sale Matilda Group intended to use this ICONIC figure as their mascot, to reside over their vision for what was to be hundreds of Matilda service stations Australia-wide.

Natureworks Pty Ltd a specialist art fabrication company in Highvale (nr Samford) north of Brisbane was engaged to re-design a slimmer version without losing the spirit of the original sculpture.

The rear end of the original Roo was over 4.2 metres wide and posed a problem for both fabrication and transport of the piece, so this width at the hips was reduced to 2.4 metres and the height to 9.0 metres, making it easy to transport.  The head and ears were built as separate components and Natureworks installed the first piece at Tugun on the Gold Coast in 2009.

When negotiations for the sale of the service station group later began the fabrication of further pieces was put on hold. A year later the concept died once “PUMA”  took over the group. The Tugun fuel depot now owned by “Puma” sold the sculpture back to Natureworks who is now offering the piece for sale in Australia.

The fibreglass sculpture is in excellent condition finished in pre-pigmented polyester gelcoat. It has been designed so as to enable a head turn and an eye-wink as an option.

It can be easily assembled on a concrete slab in less than a day. This highly refined version of Matilda is designed to sit in the open forever.

It is the next BIG THING waiting to put your business on the Australian map.

Can't find what you are looking for?

Talk to us today to get a custom quote

Help us, help you!

Please fill out the custom quote section above with your requirements to allow us to meet your needs better. Or add product to quote!

Want to adjust the size or colour? Contact us today or fill out a custom quote and our friendly team will contact you shortly.

Our prices vary depending on the size of the product and delivery. For an accurate price estimate contact us today!

Can't find what you are looking for? Get a Custom Quote Today!